What dessert do I speak of? Tiramisu of course….or wait maybe Tirime su…or maybe both? What? Both? There’s more than one? 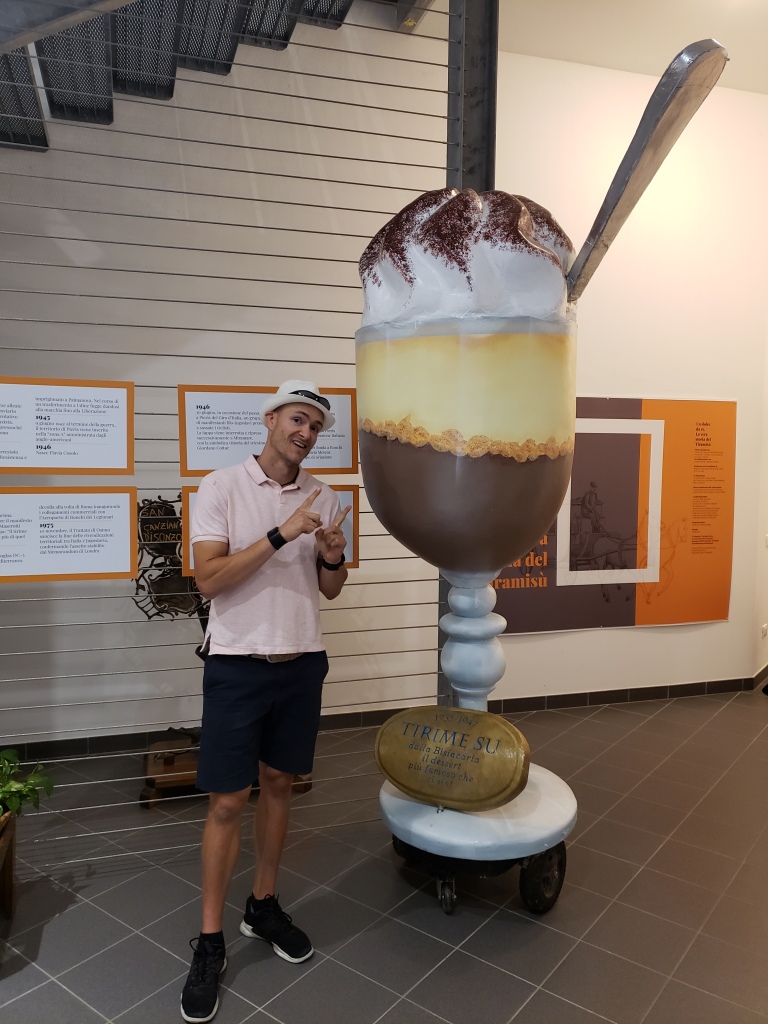 Yes, I do mean both! After getting the chance to go and deep dive the origins of what I now know is actually 2 forms of the same (but different) iconic Italian desserts, I felt compelled to share the real story with anyone willing to learn and understand the real facts of this delicious, decades-old dessert that has roots in the same province of Italy, two different cities but an hour apart both having claim to their own distinct spin on this unique “dolce” of Italy that has won the taste buds of people the world over ever since.

On Sept 20th I was invited by the promotions group that hosted the regional final of the WORLD CUP of Tiramisu held in Codroipo, IT. I had less than a day to decide whether or not to go and partake in this 2-day Friuli region adventure. I figured this was truly a once in a lifetime opportunity to indulge the foodie in me so I was all in. The next 2 days I got an experience unlike any other I’ve had since my arrival here in Italy nine months ago.  I got the chance to join several other journalists on a behind the scenes historical-culinary tour of the origins of the Tiramisu dessert. Tiramisu spelling also implies Tirime su as well.

The competition was 2 days, a morning and afternoon session of 40 competitors each day. Half in the original recipe class (6 ingredients) and half in the creative class. Creatives class got to use up to 3 additional ingredients and sub in any kind of biscotti (Italian cookie) for the traditional ladyfingers. No one could be a trained professional pastry chef by the way so all the participants were normal folks from all over Italy and Europe. Eight of the participants would be selected to move on to the semi-final held in Treviso on 3 November where they vie for spots in the world cup final of best Tiramisu in the world! 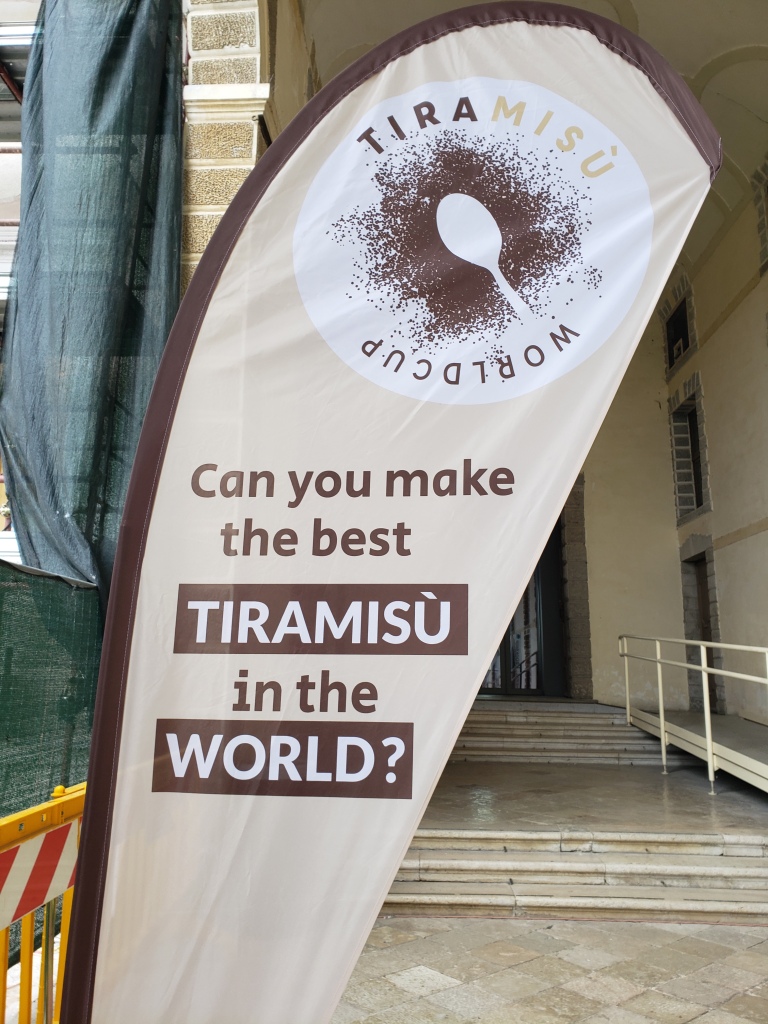 Now I only spent maybe two hours at the Codroipo competition site of Villa Manin (a truly gorgeous place!) on Sunday afternoon, the second and final day of competition after returning from the day’s tour in Tolmezzo. I did not have time to stay longer and try out the endless samples of competitors products but frankly, I am not sure I would have appreciated or recalled that many small samples in such a short time. Delicious sure but of little value to someone trying to really learn and understand and appreciate the origins of the dessert, not just fill my belly with it. Being able to get full portions of just the two original recipes was my opinion, the best way to experience the root of all other versions to come past and present. But hey, if you’re in the FVG region at all, I promise you that any version is going to be a good one!

Cool fact: First made by Mario, serving as a pastry chef in the Army, aboard a Royal Navy yacht called the “Savoia” as part of a competition call put out by King Vittorio Emanuele. His creation won first place. He took it back to his restaurant in Peiris called Al Vetturino and put it on the menu with its original name. Once word got out…..it took off and never really slowed down. Rich and famous near and far came in for this dessert helping its name spread.

Version 2: Tiramisu; What most Americans are used to in appearance and ingredients

First named “mascarpone slice” in April 1952 and then in Dec 1959 the earliest (recovered) receipt shows it named Tiramisu (perk me up).

Cool fact: The only reason this version took on the name it has today (not to copycat the Pieris version as many may think) but because a group of skiers from Monfalcone, returning from a long a tiring day of skiing stopped in to Albergo Roma (now named Ristorante Roma) for the then titled ‘mascarpone slice.’ At the end of the meal they all said to the owner (Norma’s father) they felt invigorated and that it perked them all right up from their exhaustion. When he told Norma this, she proposed they call the dessert  ‘Tirami su.’ Norma’s father loved the suggestion and declared the new name from that point on to be called as such.

Now….. let me tell you where you can go to find these original recipes yourself. 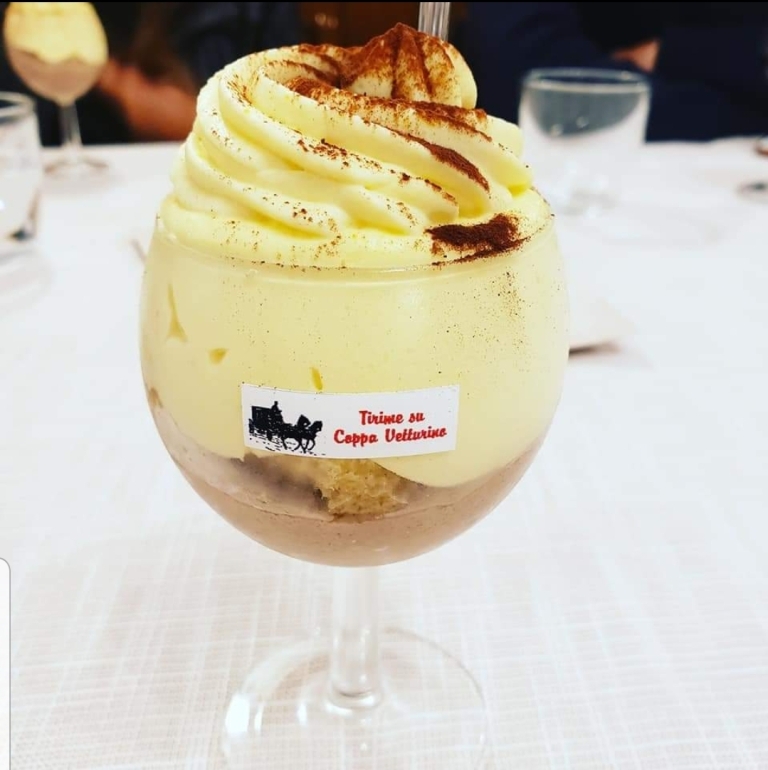 Version 2 Above: Tirami Su ( AKA Tiramisu)

Beyond just the awesome weekend trip (FVG Tourism drove us to all the sites and put us up in the beautiful Hotel Astoria in Udine) to both Pieris and Tolmezzo, trying both of these delicious desserts, getting first-hand views of the competition, I also got so much more from this trip well beyond just the sweets. I was able to hang out for the better part of 2 days with 3 other journalists of newspapers and/or websites. Again, between my Italian and their English, we made do fine. On Saturday night post museum tour about Tirime Su, I got an amazing dinner with a large group of locals from Pieris including chamber members, tourism heads and Flavia Cosolo, the daughter of Mario Cosolo who keeps her fathers and the countries iconic dessert alive around the world.

Sunday I got to stroll all around the town of Tolmezzo in the Carnic alps amidst a massive annual apple festival where anything you can think of food and drink wise was made from some kind of apple. Yes, even some Tiramisu! I got to see homemade polenta being stirred with long wooden spatulas in large pots right outside (you could smell it from yards away), frico was being made and most the vendors as well and it to could be smelled from blocks away…..both polenta and frico are traditional Friuli foods as well I should note, both deserve getting tasted if you’ve never had them before. I again got to walk with and chat in basic Italian, with two members of the Tolmezzo chamber of commerce and tourism during this city tour. Culminating in a lunch of hot polenta covered with tender stewed horse meat in brown gravy. Of course, the finish was nothing else than the cities namesake dessert, Tiramisu! I am so very sorry I never got a picture of this dish, the cardinal sin of food blogging, starting or worse, finishing a meal before getting the money shot!

Lastly, back at the competition site around 3pm with the 2 rounds complete, only the finals were left at 5pm to announce the 8 finalists moving on Nov 3rd in Treviso. Here I got to meet Mario del Fabbro the son of Norma, creator of the Tolmezzo Tiramisu another living legend of the dessert and of this region. I also got to meet the director of the FVG tourism agency, Lucio Gomiero, a super kind guy who was very open to helping me find or get anything Id need for future trips I have planned in this region. Talk about the hookup! I then got to meet a bit of a celebrity within the Italian culinary world, I even got his business card for direct contact. Roberto Lestani, 2004 world pastry champion, and current President of the IFPGC.

More than anything at all, this was as much cultural and historical as it was culinary. The places and the people behind this iconic dessert matter as much if not more than what is only plated to taste. After all, without the people, the spirit and the creativity of these select people, the families, the towns and the cities of which the foods come, no TM would exist, or perhaps not as we know it today. The pride and joy these two cities place in their world identity as the creators of this dessert is truly profound but not unlike the pride you see in Philly for cheesesteaks, Wisconsin for cheese curds, St. Louis for toasted Ravioli, California for Napa Valley wine, New Orleans for po-boys etc….cities, or even just a small town and its people take on an attachment, a pride and responsibility to sustain and defend what they love and what they know as truly their own, then, now, and always. Now that is a real “sweet ending.”

35-year-old bachelor from Midwest. I love food, wine, fitness, travel, culture and the outdoors. Living life every day as if it were on purpose! View all posts by Joshua H.

One thought on “The Origins of an Italian Dessert”